Abstract: Since 1750 the electromagnetic radiation of the Sun has increased significantly, as indicated by the sunspot record.
This increased electromagnetic radiation is considered by the author and others to be the real cause of global warming. The
examination of the annual temperature records of the northern and southern hemispheres shows a sharp change and major increases
since 1978, especially in the northern hemisphere. This is the so-called hockey stick effect, which the author concludes is not due
to the influence of Man, and probably due to a change in the geothermal regime of heat flow from the fracture zones in the floor of
the northern oceans. There is some confirmation of this in recent sea floor explorations. The role of atmospheric carbon dioxide
and methane is considered in relation to claims that emissions by Man are causing global warming. It is shown that the increased
warming is due to the Sun, and that the consequent warming of the oceans is causing the ex-solution of carbon dioxide and
methane from the oceans, simply due to the decreasing solubility of these gases in sea water with increasing ocean temperatures.
The extensive exploitation of groundwater around the world over the past century, at rates far in excess of possible recharge, has
created a net addition to the hydrosphere commensurate with the apparent rise in sea levels over the past century. There is deadly
pollution in the atmosphere over many world cities and industrial regions. These are local and regional matters, and should be
corrected at the sources of pollution. Air pollution and global warming are scientifically separate matters. 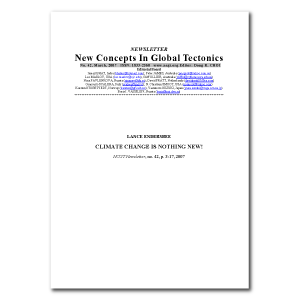 You're viewing: CLIMATE CHANGE IS NOTHING NEW.- Lance Endersby FREE
Add to cart