Kurt Johannsen was a pioneer, inventor ,improviser of the Northern territory. Born 1915 at Deep Well station, 50 miles soutn of Alice Springs. A bush engineer with a stroke of genius. If you ever see this book and want to get an insight if to early Australia and the adventures of a true pioneer. When Kurt was a lad  Alice Springs had only thirty five houses. His dad bought the first car in the area and fuel had to be brought in on camel back.  His big invention which is every where today is the turning system used in Road Trains so that the trailers follow the prime mover properly.   Another  interesting innovation was the WOOD GAS  BURNER  mounted on the rear of the car as seen in the photo. Such units were common in the War Years and I remember my Uncle had a unit on the rear of a Vangard.  His system had a few innovations that made it very efficient and he still used it in his latter years.It was his annual trek to Alice Springs from Adelaide and off he would go.  A basked of wood would go for about 300 miles. Often he just picked up wood from the side of the road in those days.  A remarkable Australian. They don’t make’em like that any more. I had the privilege of meeting Kurt  in the late 90’s. 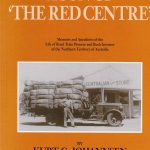 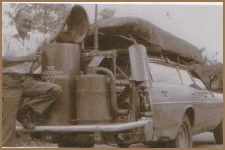