The LOST JOURNALS OF NIKOLA TESLA

THE LOST JOURNALS OF NIKOLA TESLA – HAARP – Chemtrails and the secret Alternative 4 – 155 pages – Tim Swarts – Sensational Data obtained from inventor’s most private papers and kept under wraps by military and big business concerns.

Tesla is preceded in greatness only by Michael Faraday who in 1831 rocked the scientific world with his discovery that magnetism can produce electricity, if it is accompanied by motion. Faraday discovered the principle, but not how to make it power the world; Tesla alone accomplished this singular feat. Tesla is one of only two Americans to have a unit of electrical measurement named in his honor. Names for units of electrical measurement are derived by using the names of scientists who made the greatest contributions in electrical science, forming perhaps the most elite group in the world. 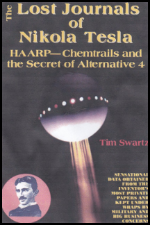 You're viewing: The LOST JOURNALS OF NIKOLA TESLA $ 12.50
Add to cart