CLIMATE CHANGE – Explained by Magnetism – Tom Watson’s book A Fresh Approach to Magnetism and his scientific paper Why We Are
Experiencing Global Warming, and now this most recent publication ‘Climate Change’: Explained by Magnetism’,
I found them all to be highly thought provoking.
Tom’s enthusiasm for physics represents a classic approach to the study of science. Twenty-first century
scientific education emphasises the need for strong numeric and literacy skills upon today’s scientists.
Although this serves many benefits, its main pitfall is that it threatens to contaminate our minds with another’s
scientific beliefs and practices which therefore fosters ‘sheep-science’ that is often over-valued, repetitive,
inefficient, and wrong.

Tom’s largely self-educated approach to physics mirrors that approach taken by many of our scientific
ancestors. Such an approach to science is sometimes less defined and less empirically controlled than
contemporary scientific practices, but it does possess what today’s academics appear to greatly lack – a
classic mind of originality and ingenuity. These two factors largely constitute the highly misunderstood
minds of geniuses as they often foster thought beyond convention and the believable.
The question of the relationship between magnetism & Gravity has been solved with Tom’s formula
showing a relationship between an electron’s activities to its nucleus in an atom, as well as showing a
combination that has the same magnetic field emission we understand as the term Gravity.
Burkhard Heim’s statements in a report quoted in ‘Wikepedia, the free encyclopaedia’ show that he was close
to the mark indicating that this is happening, but could not prove it. Tom has a simple formula that most
science students can follow and, like Heim, Tom needs support to expand his proposal by making the
science public aware of his finding, and the association of the activity of our Sun and Earth.
His finding indicates that the prime reason for Climate Change is because of our Heliosphere reversal,
rather than the popular notion that this is caused primarily from emissions of carbon dioxide and industrial
pollution. Tom shows the relationship of the reactivity of the Earth and the seasonal reversal effects
caused by our Sun’s magnetic polarity switching that occurred last on 15th February 2001.
Tom has developed his formula that generates accepted Gravity values from atomic features such as mass
diameter, and shows the magnetic expansion factor at work, as well as showing the relationship between
an electron and its atomic nucleus. He has called this the ‘Gravity Watson’ factor (‘gw’).
Some readers may find elements of Tom’s work somewhat controversial. However, in the end I hope
that they will also view Tom’s work as an inspiration for amateur scientists to explore, and then to share
their scientific findings with the broader community.
Jason Paul Buttigieg
Australian Atomic Research Team – www.aart-jb.com
1st July 2007 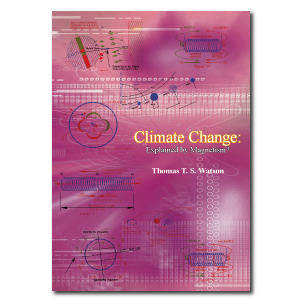