TRILLIONS FOR THE BANKERS

TRILLIONS FOR THE BANKERS –  DEBTS FOR THE PEOPLE – A classic on the greatest fraud ever perpetrated on mankind for total enslavement. A good read. you will be shocked. The author: History reveals nations can be conquered by the use of one or more of three methods. The most common is conquest by war. In time, though, this method usually fails, because the captives hate the captors and rise up and drive them out if they can. Much force is needed to maintain control, making it expensive for the conquering nation.
A second method is by religion, where men are convinced they must give their captors part of their earnings as “obedience to God.” Such a captivity is vulnerable to philosophical exposure or by overthrow by armed force, since religion by its nature lacks military force to regain control, once its captives become “disillusioned.” The third method can be called economic conquest. It takes place when nations are placed under “tribute” without the use of visible force or coercion, so that the victims do not realize they have been conquered. “Tribute” is collected from them in the form of “legal” debts and taxes, and they believe they are paying it for their own good, for the good of others, or to protect all from some enemy. Their captors become their “benefactors” and “protectors”. Although this is the slowest to impose, it is often quite long lasting, as the captives do not see any military force arrayed against them, their religion is left more or less intact, they have freedom to speak and to travel, and they participate in “elections” for their rulers. Without realizing it, they are conquered, and the instruments of their own society are used to transfer their wealth to their captors and make the conquest complete. In 1900 the average American worker paid few taxes and had little debt. Last year payments on debts and taxes took more than half of what he earned. Is it possible a form of conquest has been imposed on our people? Read the following pages and decide for yourself. And may God have mercy on this once debt-free and great nation (usa but also Australia and all countries)– The Author We see this strategy right in our faces today. Loud and clear! 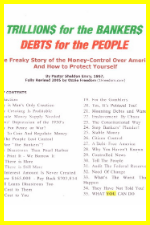 You're viewing: TRILLIONS FOR THE BANKERS FREE
Add to cart