DEADLY DECEPTION AT PORT ARTHUR – Author Joe Vialls – Joe has now left this world but his book lives on and is a must read by every Australian to understand what has really gone down here. Quote: ‘ In less than thirty minutes at six crime scenes, 35 people were shot dead, another 22 wounded, and 2 cars stopped with a total of 64 bullets. A fast moving Daihatsu Feroza 4WD driven by Linda White was crippled by a Beirut Triple; normally reserved for dead-blocking Islamic terrorists driving primed car bombs around Lebanon. One sighting shot, a second to disable the driver, and a third to stop the engine before the primed car bomb can hit its target and explode. very few know of this obscure technique, even fewer can master it with only three bullets. This awesome display of marksmanship was blamed on an intellectually impaired young man called Martin Bryant, who had no shooting or military experience at all. This book proves scientifically, Bryant killed no one at Port Arthur. it is now up to the Australian Federal Government and people to track down those responsible for ordering and funding this loathsome terrorist attack against Australians on Commonwealth territory’.

In recent times being early 2019 we saw how Pauline Hanson had been secretly recorded and it was clear she knew about this book describing the colour cover. Then later she came out to the media stating that she did not dobt that Bryant was the killer. It seems there is enormous pressure brought to bear on any one who publicly questions these Psy-op operations. She should have had the courage to stand by her convictions and knowledge of the truth and simply ask for a Royal commission as we all need to know the truth. Martin was tortured by solitary confinement for around six months before he gave in and gave a guilty plea which his mother now regrets. We now see a possible repeat of this form of justice with Cody Herrman who may or may not be guilty of the horrendous murder of Aiia the Israeli Palestinian. Cody has been locked up for many months now and probably solitary. We know he is the sort of guy who has always taken the blame for everything and is a soft target like Bryant. He did plead ‘Not guilty’ and then changed. We can only hope the truth comes out. In martin Bryants case there was no inquest and nothing put to the test. He had no hope. Like JFK we know he could not have been shot as claimed…but still the lie lives…they all need the patsy. 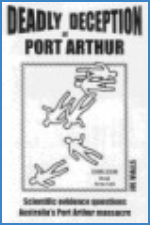